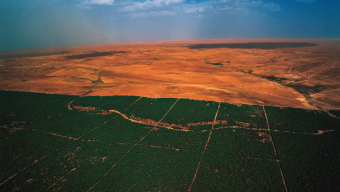 Twenty African nations have banded together to build a monumental Great Green Wall of Africa – a forest of drought-resistant trees stretching across the edge of the Sahara Desert.

Stretching over a space of 9,400,00 square kilometres and covering most of North Africa, the Sahara is the largest non-polar desert in the world. And it’s getting bigger.

According to the US’s Public Education Center website, the effects of climate change are causing the Sahara to creep into bordering countries such as Senegal, Mauritania, and Nigeria, which poses a serious threat to their farmlands and agricultural productivity. The Guardian reports that by 2025, two-thirds of Africa’s arable land could be lost to the desert if nothing is done to stem its expansion.

To mitigate this and other environmental issues affecting Africa such as land degradation, the effects of climate change, and a loss of biodiversity, Senegal is leading a 20-nation initiative known as the Great Green Wall. Most notably, this initiative involves erecting a wall of trees across the southern edge of the Sahara desert, which will be 14 km wide and 7,600 km long. When completed, it will be the largest horticultural feature in history. The initiative will also focus on establishing sustainable farming and livestock cultivation, and improving food security.

The initiative will be ongoing, and has garnered the support of several international organisations including the UK’s Royal Botanic Gardens, the World Bank, the African Union, and the UN’s Food and Agriculture Organisation. Together they have pledged $3 billion and the expertise of their botanists for its advancement.

“Examples of success [so far] include more than 50,000 acres of trees planted in Senegal,” says Ryan Schleeter at National Geographic. “Most of these are the acacia species Senegalia senegal, which has economic value for the commodity it produces, gum arabic. (Gum arabic is primarily used as a food additive.) A small portion of the trees are also fruit-bearing, which, when mature, will help combat the high levels of malnutrition in the country’s rural interior.”

Even more dramatic is the project’s potential social impact, says Schleeter. By providing better quality land and more opportunities to earn an income from cultivating it, the Great Green Wall will open up thousands of job opportunities to the local population.