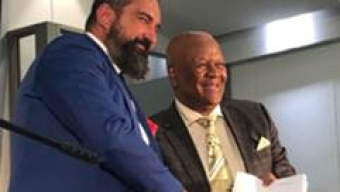 The Company had been awarded preferred bidder status under Round 4 of the South African Department of Energy Renewable Independent Power Producer Procurement (REIPPP) Programme for the wind and hydro projects in April 2015. These agreements signed on Wednesday, 4 April 2018, will be the official start for the construction of the wind farm in Roggeveld, in the Laingsburg area, straddling the border between the Northern and Western Cape Provinces and the small-hydroelectric plant in Kruisvallei, in the Free State Province.

The overall investment in the construction of the two plants amounts to 324 million Euros.

The Roggeveld wind farm will generate around 613 GWh per year. The energy generated will satisfy the energy needs of roughly 49.200 households every year while avoiding the emission of about 502.900 tons of CO2 emissions. Construction work is scheduled to begin in 2018 and the Commercial Operation Date is foreseen to be in April 2021. More than 5.300 new jobs will be created during construction phase of the plant, with another 7.920 long-term jobs created during the operation phase.

Instead Kruisvallei small-hydroelectric plant will generate around 28 GWh of energy annually, catering to the energy needs of more than 2.330 households. In addition to covering the community’s energy needs, the plant will save atmospheric emissions of more than 23.800 tons of CO2 per year, creating more than 714 jobs during construction phase, with another 720 long-term jobs created during the operation.

Previously, Building Energy had already been awarded a 81 MWp solar farm in Kathu, in the first Round of the REIPPP Programme, which has been operating since August 2014 and is one of the largest solar PV plants on the continent. From its Cape Town office, the company manages and coordinates over 40 projects that are operational or under development in Africa and the Middle East across the technologies of solar PV, wind and small-scale hydroelectric energy, including inter alia projects in South Africa, Uganda, Mali, Malawi, Cameroon, Tunisia, Botswana, Zambia and Cote D’Ivoire.

“We are delighted to have signed the agreement at the presence of Minister of Energy of South Africa, – said Matteo Brambilla, Building Energy Managing Director Africa and Middle East – for the construction of the Roggeveld plant, which represents our first wind farm in South Africa. We are also excited to develop two of the 2.3GW of renewable energy projects allocated by South African Government in the first major investment deal under President Cyril Ramaphosa”.

The projects will reduce CO2 emissions in excess of 526.700 tons and will create over 6.014 new jobs during the construction.

Building Energy is a multinational company operating as a Global Integrated IPP in the Renewable Energy Industry on four continents. The Company is vertically integrated across the value chain, from the development of projects to the sale of energy. With a pipeline of over 2,600 MW in 20 countries and more than 700MW of generative assets being built over the next two years, the Company is positioned to be one of the major players on the international scene in the renewable energy field. For further information, visit the site www.buildingenergy.it.