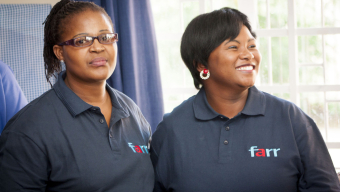 De Aar Solar Power delivered a sponsored vehicle donated to the Foundation for Alcohol Related Research (FARR) this morning, during the official re-opening of the FARR/Joan Wertheim Centre in De Aar. The refurbishment of this centre was also funded by the Solar Plant, who announced their support of FARR towards the end of last year.

“It is our hope that the vehicle will help the Centre and their staff support the community of De Aar, who rely on their dedication and work against Fetal Alcohol Syndrome. This community centre, has an important role to play by offering its clients and the wider community a valued service and support, by providing sustenance to a community in need,” said Marion Green-Thompson, Economic Development Manager for De Aar Solar Power.

Clients, parents, funders, members of the community and Departmental Officials attended the opening. The Centre is a hub for experts, community workers and everyday South Africans who are determined to improve the lives of those affected by FAS, their families and caregivers. They are involved in training, education, research, prevention, support and management projects across South Africa.

Fetal Alcohol Syndrome is the most common preventable form of mental disability in the world and is estimated to affect three million children in South Africa, with a significant percentage from the communities in and around De Aar.

FARR is a leading NGO source of research and information on Fetal Alcohol Spectrum Disorders (FASD) and the most severe form of this disorder, namely Fetal Alcohol Syndrome (FAS) in South Africa. The organisation is dedicated to building positive futures in South African communities by significantly reducing birth defects and mental disabilities caused by alcohol consumption during pregnancy.

“Our community at large understands that FAS is more common than Down Syndrome, Spina Bifida and Autism combined and that the damage to the unborn child is permanent and cannot be reversed,” concluded Green-Thompson.