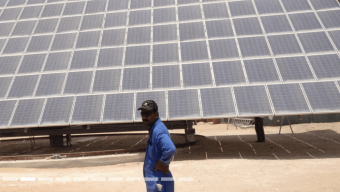 The Saudi Arabian renewable energy company Energy Systems and The meeco Group partnered in 2018 in order to support the country’s clean energy approach and equip private as well as commercial customers with sustainable energy solutions. Taking into account the excellent preconditions for renewable energy systems in the country, the declining prices for PV technolo gies and the growing interest of Saudi Arabia’s government to shift from fossil fuels to sustainable energy sources, the exploitation of solar energy represents a promising opportunity for private as well as commercial consumers. Within the scope of the founded joint venture company oursun Saudi Arabia, the first four sun2roof solar projects with a total capacity of 146.6 kWp have now been completed and ensure an annual clean energy generation of about 250 MWh.

Three of these sun2roof solar projects were commissioned in Al Khobar, located in the eastern part of Saudi Arabia.  A 5 kWp PV system and a 12 kWp solar solution were installed on the rooftops of private houses and generate about 10 MWh and 19.6 MWh of clean energy per year saving more than 5,500 kilograms and 11,620 kilograms of polluting CO2emissions annually. The third sun2roof solar system has a capacity of 123 kWp and was installed on the roof of a local company ensuring a clean energy generation of 207 MWh annually and a CO2savings of more than 120,000 kilograms per year. In the region of Bisha, located in the Southwest of the Kingdom, another private house was equipped with a 5.8 kWp sun2roof solar solution also feeding the grid with clean energy.

“Thanks to the straightforward collaboration with Energy Systems, the implementation of the sun2roof systems could be realised smoothly”, summarises Sebastian Bovensiepen, CEO of The meeco Group. “The interest of private consumers in Saudi Arabia in renewable energy sources is steadily growing as our project pipeline shows. Moreover, we are also in the preparation stages with solar projects for commercial consumers such as agricultural and industrial companies that are look ing for a reliable, eco-friendly and economic way of generating power.”