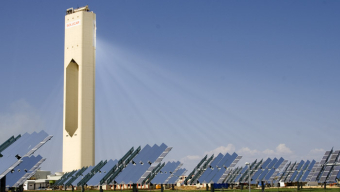 The European Investment Bank, Europe’s long-term lending institution, has agreed to provide US$63.5 million for the Khi Solar One project. This is the first large concentrated solar power project in sub-Saharan Africa and one of the first private sector renewable energy projects in South Africa.

European Investment Bank support was formally agreed at the financial close of the project during the official closing ceremony for REBID 1 projects.The Khi Solar One project consists of a 200m high tower and more than 4,500 heliostat moving mirrors to reflect light onto the tower.  It is located on a 600 hectare site close to Upington, in South Africa’s Northern Cape province. Jointly owned by Abengoa, the Industrial Development Corporation (IDC) and with Black Economic Empowerment (BEE) involvement, the 50 MW project will be Abengoa´s third commercial solar tower and it’s first outside of Spain.

The South African plant will have more than double the capacity of the last tower Abengoa built in Andalucia. Khi Solar One will use concentrated solar technology that harnesses solar radiation by focusing it onto a small area to produce steam, which drives a turbine and produces electricity. Advanced dry cooling technology will reduce water consumption by two thirds.

The Khi Solar One plant will sell its electricity to South Africa’s state owned electricity utility, Eskom, for 20 years, agreed under a power purchase agreement (PPA). An average of 600 construction jobs will be created during the construction period and there will be about 35 fulltime plant operations employees. The plant will be able to store thermal energy for two hours and will prevent about 183,000 tonnes of CO2 emissions a year.

The Khi Solar One scheme was financed using a project finance framework and is expected to attract developments, investors and lenders to support other renewable energy schemes and secure broader support for financing innovative renewable projects in South Africa. IFC, FMO, Proparco, IDC and the Development Bank of South Africa (DBSA) are also supporting the project.