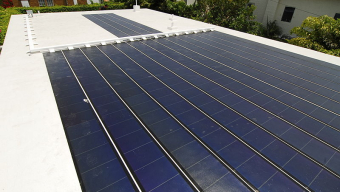 Environmental regulations focusing on curbing greenhouse gas and other emissions, and the need to enhance energy self-sufficiency and security, are rapidly powering the growth of the solar market — with an upward trend in Asia-Pacific and Africa, among others — according to Frost & Sullivan.

Africa has an abundant and readily available supply of resources for renewable energy power generation, as well as wind and solar photovoltaic (PV) power plants. The costs of solar technologies, especially solar PV, have been rapidly declining over the past few years in Africa, and the levelized cost of energy (LCOE) is now competitive with many other conventional generation technologies, especially for distributed, off-grid and hybrid solutions.

In South Africa, PV is now able to compete with municipal distribution tariffs in several instances. The storage ability of Concentrated Solar Power (CSP) counteracts the argument that renewables are unable to serve a baseload function in countries such as South Africa — with certain operational CSP projects having storage capabilities of up to 15 hours — while the aggregation of PV plants has been proven to substantially reduce the variability of the power generated to within an acceptable level of variability of around 5 percent, according to Frost & Sullivan.

This must-attend Equifax webinar – led by the NCTUE board members Buddy Flake (SCANA), Leon Broughton (Citizens Energy Group) and Bob Romeo (AT&T) – dives deep into the mechanics of an industry specific data resource from the (NCTUE) that offers practical, relevant credit insight on more than 170 million consumers. Plus you’ll hear exclusive use cases based from real utility organizations that have leveraged this data to solve common business issues, update and realign their business processes and reap substantial financial benefits.

In Europe, the market continues to grow. In 2006, Germany was the first in the EU to incent solar PV power with feed-in-tariffs, and the market installed capacity has expanded rapidly and is still the largest solar power market in the world, the researcher says. By 2020, Germany, France, Spain, Italy, and the United Kingdom, collectively, plan to install more than 75 GW of solar PV capacity.

In the meantime, the United States has become a lucrative destination, according to Frost & Sullivan, as the price of solar PV systems in the region has declined due to the reduction in imports from China following the imposition of anti-dumping and illegal subsidy tariffs on imports.

“The global solar power market is benefitting from various incentive schemes in the form of tradable green energy certificates, FiTs, subsidies, and tax rebates for the use of renewable energy for power generation. However, these incentive schemes continue to be very heterogeneous, making solar PV penetration rates vary widely based on local and regional policies,” said Pritil Gunjan, Frost & Sullivan Energy & Environmental industry analyst. “Drafting strict clean energy regulations and offering adequate subsidies to the renewable energy sector will be essential. Equally important will be maintaining clarity in the incentive guidelines for solar power so that project developers, investors and customers are not misled and can make proper investment decisions.”