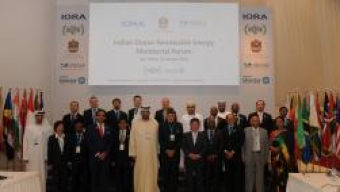 Ministers and senior officials from 25 Indian Ocean Rim Association countries today launched a series of new initiatives to accelerate the deployment of renewable energy throughout the Indian Ocean region.

The cooperative initiatives – the region’s first collective response to its rapidly growing clean energy sector – were formed during Abu Dhabi Sustainability Week as part of a ministerial meeting hosted by the UAE Ministry of Foreign Affairs, the International Renewable Energy Agency (IRENA) and the Indian Ocean Rim Association (IORA). Ministers agreed that IRENA and IORA will coordinate the multi-nation partnership, which will produce the region’s first comprehensive renewable energy resource assessment, costing analysis, a capacity building and training listing service, as well as a pilot programme to support green tourism on small island states.

Proposals under the partnership will be presented at the IORA Council of Ministers’ meeting October 2014 in Australia.

The ministerial meeting highlighted the major shift in renewable energy investment potential in the region, which represents roughly 15 percent of global energy demand. Today, more than half of the countries in the region report that renewable energy is the most cost-effective option for new power generation.

“Many countries in the region are at a tipping point and their economic opportunity now firmly lies with renewable energy,” said Adnan Z. Amin, director-general of IRENA. “Renewables provide an unprecedented opportunity to address their growing energy demand sustainably and to improve access to energy and security of supply at the same time.The initiatives launched today further strengthen the business case for renewables, providing a detailed and balanced analysis of benefits, costs and technological options in the region for the first time.”

Ministers also underscored that the renewable energy market is growing and commercially attractive at both large and small scales, particularly for countries that burn petroleum products for electricity. South Africa’s latest round of power-plant tenders indicates that renewable energy can out-compete coal on incremental cost as well. For the 570 million people in the region without electricity access, ministers emphasized that renewable energy is already cheaper than the diesel and kerosene typically used to extend modern energy services.

The secretary general also highlighted the role of public-private partnership in the renewable energy sector and encouraged women’s empowerment through use of renewable energy in home-based micro and small-scale industries.