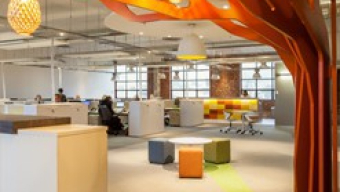 Interface, a carpet tile producer and environmental pioneer in its field, has reached a series of major sustainability milestones at its European manufacturing facility in Scherpenzeel in The Netherlands.

Interface modular flooring is exclusively distributed in South Africa by Kevin Bates Flooring & Carpeting, with operations both in Johannesburg and Cape Town, where it is represented by Albert Carpets.

Since the beginning of 2014, Interface has been operating with 100% renewable energy (both electricity and gas,) using virtually no water in its manufacturing processes and has managed to attain zero waste to landfill. This is particularly significant as carpets contain a high oil content in the nylon fibres and thus become non-biodegradable landfill components.

Neil Duncan, Chief Financial Officer for the Kevin Bates Group, says Interface’s latest achievement is a major step forward for the Dutch company which has pledged to eliminate any negative impact on the environment by 2020 and, by doing so, become a restorative enterprise.

“Interface started its Mission Zero journey in 1996 and by 2013 had reduced its greenhouse gas emissions by 80% and water usage by 87% in Europe. The company has recently introduced several innovations that are significantly reducing its impact on the environment even further, achieving 95% water reduction, and 90% carbon reduction from January 2014. One example is the company’s recent switch to green gas at its facility in Scherpenzeel. The gas is now created by anaerobic digestion of fish waste, which is filtered to natural gas and pumped into the grid. The other major innovation implemented has been a water recirculation system through closed loop piping,” Duncan stated.

Commenting recently on Interface’s sustainability achievements, the company’s acting CEO in Europe, Rob Boogard, said for Interface, Mission Zero was not simply about reducing the company’s own direct impacts on the environment, but also about taking full responsibility for the entire lifecycle of its products. “Our goal is to cut the umbilical coil to oil which has historically been an integral part of carpet production. About 44% of Interface’s raw materials in Europe area are already recycled or bio-based,” he stated.

Lesley Fidrmuc, Interface Consultant at Kevin Bates in Johannesburg, says Interface has also incorporated its passion about ecological preservation in its latest carpet tile designs now available in South Africa. “The new Urban Retreat and Net Effect biophilic designs, for example, create visual and physical connections with nature, using foliage, the sky, rivers, the sea, as well as other aspects of nature as dominant features. The reaction from the South African market place has been amazingly positive as architects and designers are now increasingly striving towards sustainable, responsible construction and interiors,” she adds.