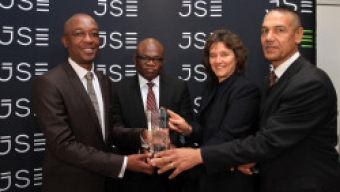 The Johannesburg Stock Exchange (JSE) has listed its first green bond. The R1.46 billion ($140 million) bond issued by the City of Johannesburg will be used to fund green initiatives within South Africa’s largest city.

The bonds are priced at 185 basis points (1,85%) above the R2023 South African government bond. The bond auction, which took place in the week before the listing, was 150 percent oversubscribed. The bond, referred to as COJGO1, will mature in 2024.

The bond will be used to fund climate change mitigation strategies especially those that include greater use of gas and natural energy. One of the city council’s green programmes include the installation of 43 000 solar water heaters by City Power that will collectively save the equivalent of 22.5GW-hours of electricity a year, enough to run a small town.

“The green bond will provide the city with a funding source to improve and expedite the implementation of its climate change mitigation strategy, a low carbon infrastructure, minimal resource reliance and increased natural resources,” says Parks Tau, Executive Major of the City of Johannesburg.

“The JSE has always been linked to the development of our city and we are pleased to work with the City of Johannesburg to bring this bond to market. Funding green projects are important in all cities to ensure their greater sustainability,” says Graham Smale, Director of Bonds and Financial Derivatives at the JSE. Johannesburg is the first city in the C40 Cities Climate Leadership Group to issue a green bond.

The city council issued its first municipal bond in 2004 and had redeemed R1.9 billion, including R900 million in the past 12 months.

The JSE regulates the largest listed debt market in Africa, both by market capitalisation and by liquidity with approximately R25 billion traded daily. At the end of 2013, the JSE had roughly 1 600 listed debt instruments worth more than R1.8 trillion. More than half of the debt listed on the JSE is placed by the South African government.