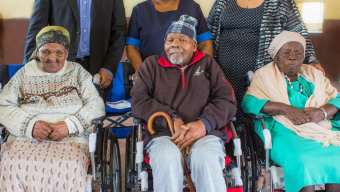 The KwaNomzamo Home Community Based Care project in Jeffreys Bay has received a R225 000 donation from Jeffreys Bay Wind Farm. Included in this donation are twelve wheel chairs, which have been donated to community members from the KwaNomzamo community. This forms part of the wind farm’s socio economic development programme that has already invested around R2million into local communities over the last 12 months. “The KwaNomzamo Home Based Care project fits into our social development programme’s principles; the care that they bring to the community of KwaNomzamo is highly commendable and invaluable to the vulnerable adults and children that they care for,” said Marion Green-Thompson, Economic Development Manager for Jeffreys Bay Wind Farm.

The donation and wheel chairs were handed over at an event held at the KwaNomzamo community Centre; a community centre situated close to the KwaNomzamo Home Base Care project, on 8 October 2014. Recipients of the wheel chairs range from a young school boy who is physically handicapped to a 90 year-old elderly community resident who is currently house-bound.   “The wheelchairs will help our struggling community members who are mostly housebound at the moment; they will now be mobile which helps them to regain their independence and dignity,” said Mrs Majola.

Ms Monica Majola is the Project Manager of KwaNomzamo Home Based Care, a project that provides care to people infected with HIV/AIDS in their homes. Care and support is also offered to Orphaned and Vulnerable Children, which includes child-headed households. Part of the R225 000 donation will be used for the purchasing of equipment and the provision of food parcels and cooking for children living in Child headed households.

The organisation was founded in 2005 by community volunteers together with the Department of Health and Social Development, which still provides funding. Majola, who grew up in the Tsitsikama and Ciskei, is involved on a daily basis in the project together with 22 staff, and is responsible for overseeing the caregivers, generating reports as well as managing the finances.

Ms. Majola, who was previously a Ward Counsellor, speaks about her role model, recently deceased Mama Jem, who mentored her and imparted many skills. “I came to Nontswakazi to use my skills and experience as a project manager, for which I won the Kouga Municipality Award for community building in 2008,” said Ms. Majola. She is married, has 5 children, 10 grandchildren and 2 great grandchildren.