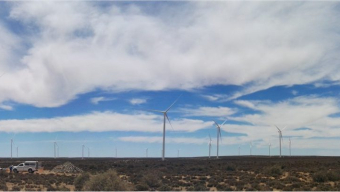 Loeriesfontein Wind Farm has announced the completion of all 61 wind turbine installations as well as having achieved over 1,25 million hours without a single lost-time-incident, on the 1 March 2017. “This is a hugely significant health and safety construction milestone for one of the country’s largest wind farms, so considering the sheer scale of the project, the multiple level of activities and the complexities involved, it is an impressive achievement,” said Christo Loots, Project Manager of Loeriesfontein Wind Farm.

The wind farm completed the lifting of all its wind turbine generators ahead of expectation which is attributed to the dedicated turbine installation crew who began the lifting process during August 2016. The installation crew worked many late nights and early mornings to take advantage of the periods of low wind to install all the turbines in six months and ahead of schedule.

Approximately 70% of the workforce come from the Loeriesfontein community and have directly benefitted from the skills development programmes. This work experience will no doubt benefit Khobab Wind Farm, the adjacent wind farm, which will commence with its first turbine lifting early next month.