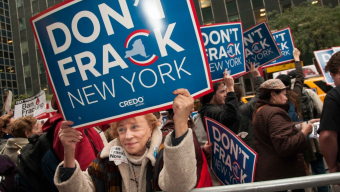 We are always in need of more sources of energy in the world. In recent times, large deposits of natural gas have been discovered deep under the ground, and therefore it seems logical to access this energy. Some are convinced that fracking is the answer – and we know about that in South Africa.

‘Fracking’ is short for fracturing the earth, detonating explosives and pumping a mixture of water and toxic chemicals at high pressure underneath the ground to hopefully release some valuable natural gas and oil.

In New York state (and now in Scotland as well) fracking has been banned indefinitely. In New York specifically, over the last few decades 15,000 oil and gas wells have been active and have supplied most of New York’s energy needs. So why have they now banned it?

We ask this question knowing that in the Karoo it’s about to start happening. Their extensive experience has shown fracking’s impact on:

The list is impressive and it goes on. From a community perspective, fracking caused increased vehicle traffic, road damage, noise, and odour issues, as well as a challenging need for housing and medical care, and overwhelming levels of stress.

This supports other evidence and experiences that suggest that fracking is neither beneficial to society nor to the environment. However, based on perceived benefits, it may very possibly be allowed to go ahead in South Africa, where President Zuma has referred to it as a “game changer”.

But based on the New York experience (and others), is it really? South Africans need to be aware of the issue and form their own opinions on whether the perceived financial gain for their country would justify the potential damage to communities and the environment in which they live, and whether this is something we REALLY do want for the Karoo.