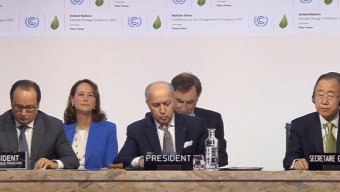 The UN’s High Level Event on Paris Entry into Force has today surpassed expectations, as over 30 nations formally ratified the Paris Agreement, taking the number to officially approve the treaty to 60 countries covering 47.78 per cent of global greenhouse gas emissions.

The influx of official ratification documents to the UN means the first threshold for bringing the treaty into effect – ratification from 55 nations – has been passed.

UN Secretary-General Ban Ki-moon said he was now “ever more confident that the Paris Agreement will enter into force this year”.

The latest tranche of countries to ratify the agreement included a number of leading emerging economies, including Brazil, Bangladesh and Morocco, which is preparing to host the next UN climate summit in November. Combined, the group of 31 nations represents over seven per cent of global emissions.

Hopes are now mounting that the agreement could come into force at the Marrakesh Summit, which starts on November 7th.

The treaty will officially come into force 30 days after both thresholds have been met, meaning there are a few weeks for countries covering around seven per cent of emissions to ratify the deal if it is to be finalised in Marrakesh.

A number of key economies, including the EU, New Zealand, and South Korea, today pledged that they intend to ratify the agreement in the coming weeks.

In addition, the UN today confirmed that Malawi, Armenia, Zambia and Chile this week became the latest countries to sign the Paris Agreement – the step before full ratification – bringing the total number of signatories up to 185.

Full ratification of the agreement would further strengthen its ambitious goals to keep temperature increases well below 2C and deliver a net zero emission economy this century.

It would also enable the next round of negotiations in Marrakesh to turn their attention to delivering on the Agreement’s climate finance commitments, fleshing out the promised review processes for assessing how nations are taking steps to curb emissions, and exploring new technologies and policy mechanisms for tackling climate change.

The progress towards the Paris Agreement coming into effect was broadly welcomed by green business leaders.

“The upcoming entry into force of the Paris Agreement is the important signal that businesses have been waiting for,” said Paul Polman, chief executive of consumer goods giant Unilever. “With this clear direction of travel from political leaders, companies can now accelerate efforts to achieve a zero carbon future.”

Jill Duggan, director of the influential Prince of Wales’s Corporate Leaders Group (CLG), said the rapid progress achieved in the past year towards an ambitious international climate change treaty was hugely encouraging for green businesses.

“We are delighted at the unprecedented speed with which this historic agreement will come into force,” she said. “This shows that governments have understood and responded to the urgency of the climate challenge – a challenge demonstrated by the record breaking temperatures experienced, yet again, this year.”

She added that the EU could now help the agreement reach the 55 per cent threshold.

“The ratification by the European Union, which accounts for 12 per cent of global greenhouse gas emissions, will be instrumental to reaching the required threshold of 55 countries and 55 per cent of emissions,” she said. “European leaders should be commended for agreeing to speed up their ratification process. Members of The Prince of Wales’s Corporate Leaders Group call on the EU to stay at the forefront of climate action and fully join the Paris Agreement in the next couple of weeks, triggering an entry into force at COP22 in Marrakesh.”