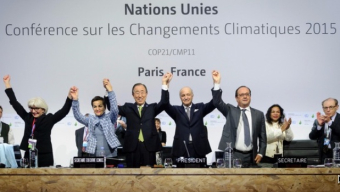 Parliament has accepted the COP21 Paris Agreement on Climate Change.

The National Assembly debated the adoption of the agreement on Tuesday.

“We’d like to express our sincere appreciation to Parliament for having processed the Paris Agreement in such record time,” she told the House.

“South Africa has a constitutionally-prescribed process to ratify all international agreements which are legally binding.”

The motion was not objected to.

Parliament’s portfolio committee on environmental affairs heard in September that South Africa would play a key role in keeping the Paris Agreement alive.

US presidential nominee Donald Trump stated in May that he would withdraw the United States from the agreement if he was elected in the November 8 elections.

“We are the controlling vote if you want, of keeping the Americans in the agreement,” environmental affairs deputy director-general Alf Wills told MPs.

If the Paris agreement was in force when the new president assumed office, legally the US could not get out of it.

The landmark agreement, which 195 countries signed in Paris last April, bound signatories to reduce the increase in global temperature to less than 2°C.

They included the US and China.

South Africa had been identified as the swing vote, Wills said, the last realistic country that could push the agreement over the 55% carbon emission threshold needed for the deal to take full binding effect.