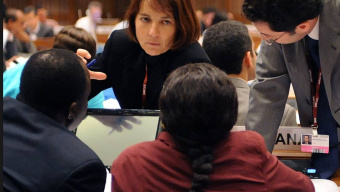 The Department of Environmental Affairs says emission reduction options in the power sector remain a priority to meet the country’s overall greenhouse gas reduction targets over the coming few years.

Judie Beaumont, the Deputy Director-General responsible for Climate Change and Air Quality, said this when the department, as well as Eskom, briefed the Portfolio Committee on Environmental Affairs on renewable energy and SA’s greenhouse emission reduction system at the National Assembly, on Tuesday.

“Emission reduction options in the power sector are absolutely critical for South Africa’s overall ability to reduce our carbon emissions and to transition to a lower carbon economy overtime.

“If we are not able to reduce emissions in the power sector, the rest of the economy has to take deeper action.

“So I think just to emphasise the importance of the power sector which really is the sector that generates – because of the reliance at the moment on coal-based generation – is the sector that produces the most greenhouse emissions,” she said.

The framework included a number of key elements – from a carbon budget for each company and desired emissions reduction outcomes for key economic sectors to pollution prevention plans by companies with carbon budgets and a reporting system to gather information on the actual emissions of users.

Other measures, including the introduction of a carbon tax, are amongst those that have been identified to support or complement the carbon budget system.

The system was introduced in phases. The first phase, which runs from 2016 until 2020, will be voluntary as there are no legal basis to set emissions limits for sector companies.

Phase 2, which will run post 2020, will become mandatory once the climate change response legislation is in place.

Beaumont said as the country is implementing the emissions reduction system, renewable energy is a critical component in that strategy.

Deborah Ramalope, Chief Director responsible for Emission Reduction in the department, said the first phase was approved in 2015, together with the litigation potential analysis which will look at what is possible per sector in terms of emission reduction targets.

She said the department has so far completed carbon budget with 18 companies, including Eskom, and that soon there will be draft carbon reduction plans that will help companies achieve their carbon budgets.

The key sectors that are being considered for the implementation of mitigation factors include energy, transport, waste, carbon sinks, among others.

“From then on, companies will be required to report to the department on an annual basis to explain how they are doing in terms of meeting their carbon budgets and we will assess compliance.”

“We take the issue of climate change very seriously as well as the issue of adhering to commitments made at the Paris conference, which should be probably ratified at [the Conference of the Parties (COP 22).

“We hope that the country will sign the COP 22 agreement [in] of November 2016 so that we remain a player in the bigger parties and groupings relating to the discussions on climate change,” he said.

He said Eskom currently contributes about 44.5% to the national greenhouse gas emissions, which is the budgeted amount, and this makes the power utility compliant.