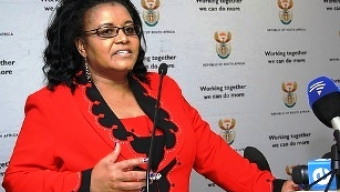 Parties to the convention had until April, 21, 2017, to sign the agreement.

Environmental Affairs Minster Edna Molewa has signed the Paris Agreement on climate change at the United Nations (UN) in New York, her department said on Friday

The Paris Agreement was adopted on December 12 last year at the 21st session of the Conference of the Parties to the UN Framework Convention on Climate Change (UNFCCC CoP21) in Paris from November 30 to December 13.

The agreement was adopted after four years of intense negotiations that was mandated by the 17th UNFCCC CoP held in Durban in 2011.

UN Secretary General Ban Ki-Moon, acting in his capacity as depository of the agreement, had convened a high-level ceremony for the opening for signature of the agreement on Friday, the department said in a statement.

Parties to the convention had until April, 21, 2017, to sign the agreement. Molewa signed the agreement on behalf of the South African Government.

“The Paris Agreement is universally regarded as a seminal point in the development of the international climate change regime under the UNFCCC. The agreement is a comprehensive framework which will guide international efforts to limit greenhouse gas emissions and to meet all the associated challenges posed by climate change. It signals the change in pace towards the low carbon development from 2020 onwards through commitments of countries in ambitious national plans called Nationally Determined Contributions.

“This outcome recognises that climate change represents an urgent threat to human societies and the planet, requiring the widest possible co-operation by all countries and other stakeholders,” the department said.

The main objective of the agreement was to limit the global temperature increase to well below two degrees celsius, while pursuing efforts to limit the increase to 1.5 degrees. The recognition of the 1.5 degree target was of central importance to South Africa as an African and developing country highly vulnerable to climate change.

“The Paris Agreement is also an important tool in mobilising finance, technological support, and capacity building for developing countries, and will also help to scale up global efforts to address and minimise loss and damage from climate change and increase climate resilience.”

Signing the agreement required that countries would later need to adopt the agreement within their own legal systems, through ratification, acceptance, approval or accession. The agreement would come into force when ratified by at least 55 countries, which together represented at least 55 percent of global emissions.

“South Africa is also striving to enhance efforts to transition to a lower carbon economy and society, as well as to adapt in the short, medium, and long-term to the impacts of increasing temperatures, and reduced rainfall in many parts of the country,” the department said.