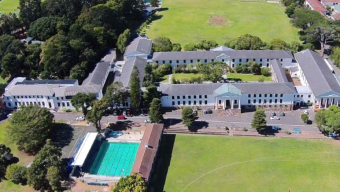 South Africa College High School (SACS) in Cape Town has made a commitment to clean energy by installing a solar system at its Rosedale Boarding House. The solar system was installed by Energy Partners Home Solutions, part of the PSG group of companies.

Barry van Selm, Deputy Headmaster at SACS explains that installing a solar system at the school was an easy choice. “SACS has become very aware of its carbon footprint, so a renewable energy option was important to us. In the past five years we have also seen huge increases in electricity tariffs so we needed to find a sustainable way of bringing those costs down.”

According to Cala van der Westhuizen, Head of Marketing and Sales at Energy Partners Home Solutions, schools like SACS, with boarding houses and plenty of activity over weekends and holidays, are the perfect place to install solar systems as these types of properties consume most of their energy during the day’s peak solar hours, and can therefore maximise the financial benefits of a renewable energy solution.

He says that the Energy Partners team achieved some interesting results while still working within the parameters that were set by SACS as well as regulatory requirements.

Van der Westhuizen explains that the Energy Partners’ team started off with an in-depth analysis into the requirements of the boarding house. “This involved taking the generation capacity that regulations would permit the team to install, into consideration.”

“According to our findings, we could install a 25 kilowatt inverter at the boarding house, which is the maximum size allowed under NRS regulations for the specific infrastructure of the site. With the actual solar array we had a bit more leeway, so we installed 30.88kWp of multicrystalline solar panels.”

This enables the system to produce at the converter’s maximum level for as long as possible during peak hours and also produce excess power that the school will be able to possibly sell back to the City of Cape Town, says van der Westhuizen.

Van Selm says that as part of the system, the school received a tracking tool that allows them to monitor the system in real time. “Being able to track the system’s energy production is very interesting and allows us to see the results. Our first electrical bill has not arrived yet, but based on what we have seen from the monitoring tool, our use of electricity from the grid has been cut by about one third which amounts to a saving of around R75 000 at the current electricity tariffs.”

“We are very excited about the results we have seen so far and looking forward to reducing our carbon footprint and electricity bills even further in the near future,” Van Selm concludes.