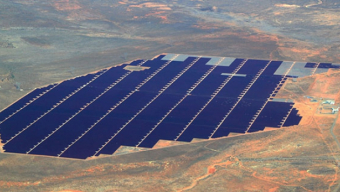 The project achieved commercial operation on August 15 this year. The project will generate 150,000 MWh electricity every year and offset 3 billion tonnes of carbon dioxide emissions.

Moncada Energy Group and Solar Capital Group provided 25% of the funding for the project, while the balance was secured through the Standard Bank. The Solar Capital Group is aggressively pursuing investment in solar power projects in the De Aar region and has several projects worth thousands of megawatts capacity in pipeline.

As part of the auctions under the REIPP programme, the South African government allocated about 70 renewable energy projects including 35 based on solar PV technology. Tribe Solar Capital De Aar 3 is among the largest solar PV project of this programme. A number of wind energy and solar thermal power projects have also been allocated. More than 1,500 MW of solar PV power generation capacity is expected to come up as part of the programme.

South Africa’s first utility-scale solar power project was commissioned last year. The 75 MW solar PV project had also been allocated through the REIPP programme and was commissioned by Scatec Solar. The solar power sector in South Africa has received significant domestic and international support since then. In the most recent of debt financing deals, the African Development Bank and the European Investment Bank agreed to provide almost $240 million to a 100 MW solar thermal power project being constructed by Abengoa under REIPP programme.