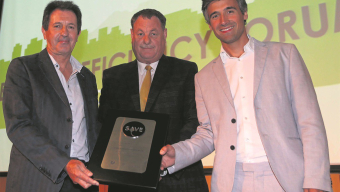 The French School of Cape Town has been recognised at this year’s Efficiency Forum Awards for the eco-friendly remodelling of the school.

The school scooped top place in the Small Building Retrofit Category at the recent award ceremony. The awards were introduced by the Cape Town Energy Efficiency Forum, a partnership between the City, Eskom and the South African Property Owners Association, to promote responsible, energy-efficient business.

The French School opened its doors in October last year after a R19m project to upgrade the former Tafelberg Remedial School on the corner of Kings and Tramway roads in Sea Point.

The school invested R13.5m in the renovation of the building and over R2m in technological and teaching materials. The provincial government contributed R3.6m for new roof finishes, stormwater goods, insulation and ceilings (“French School’s doors are open”, People’s Post, 21 October 2014).

The buildings, first opened in the 1930s, were renovated and a new eco-friendly building constructed for a library and cafeteria.

The upgrade of the building included a general refurbishment of the infrastructure, installing energy-efficient electric and water systems, as well as a newly designed garden, gaining the school a Wildlife and Environment Society of South Africa Eco-School label.

The school has also replaced all fluorescent lights with LED technology, and installed a heat pump for hot water.

Its rooftop solar photovoltaic system provides about 20% of the school’s usage during the week, and it can feed back to the City’s grid over weekends and receive an offset to generate income for the school.

So far the school is saving 15% on its electricity costs overall.

Energy awareness among staff and pupils has led to reduced use of the air-conditioning and the lights being switched off when rooms are not in use.