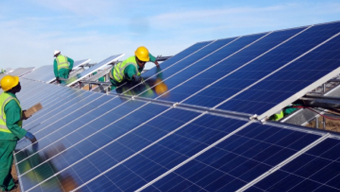 The South African solar market registered 509 MW of new PV installations in 2016. The country’s cumulative PV capacity reached 1.47 GW as of the end of December. Meanwhile, the price of solar power has dropped significantly over the past five years.

The South African market saw an increase in new grid-connected PV installations of approximately 509 MW in 2016, according to a report released by the country’s Council for Scientific and Industrial Research (CSIR).

The very low amount of new PV capacity installed in 2015 was likely due to the fact that several PV projects developed under South Africa’s Renewable Energy Independent Power Producer Procurement Programme (REIPPPP) were delayed because of grid-connection issues.

“South Africa is in 2015 again experiencing serious energy constraints, which are an impediment to economic growth and a major inconvenience to everyone in the country,” president Jacob Zuma said at the time. As a result, the government provided local utility Eskom, which is the only entity in the country entitled to buy renewable energy power under the REIPPP program, with ZAR 23 billion ($1.75 billion) in funds to help the company stabilize its precarious finances.

In February 2017, the South African government said that it intends to continue the REIPPPP program. In its 2017 Budget Review, the country’s Ministry of Finance stated that Eskom “will sign outstanding power purchase agreements for renewable energy in line with procured rounds”. The local solar association SAPVIA had previously proposed the establishment of an effective, independent, state-owned transmission entity in order facilitate the rapid connection of new generation capacity to the grid.

In the long-term perspective, the authors of CSIR have criticized the new annual build-limits for solar PV and wind imposed by the South African government, in its long-awaited 2016 Integrated Resource Plan (IRP) Draft, the expansion plan for the South African power system until 2050, which was released in November.

“No such limits are applied for any other technology. No techno-economical reason or justification is provided for these limits,” the report says. The country’s electricity demand, after all, is forecast to double from 244 TWh in 2016 to 522 TWh in 2050.

Commenting on the 2016 IRP draft, SAPVIA said: “The allocation of 17,600 MW for Solar PV in the 2016 IRP update is a step in the right direction, but falls short of the immense potential South Africa has to offer in this sector. Independent modelling, based on up-to-date figures from South Africa’s REIPPPP bidding rounds confirm that renewables are the best policy choice in order to meet South Africa’s energy needs at the least cost, while still maintaining our carbon obligation.”

The  association also criticized the annual ‘build constraint’ placed on renewables, claiming these are artificial and cost-ineffective and do not reflect the real potential that solar technology can play.