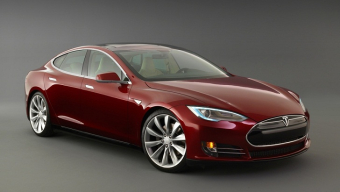 Read more: Tesla’s Model S Electric Sedan Named Car of the Year by Motor Trend | Inhabitat – Sustainable Design Innovation, Eco Architecture, Green Building Tesla Motors has plenty to celebrate this morning with news that the Tesla Model S electric sedan just received its second award from the automotive press. Motor Trend has just named the Model S sedan its 2013 Car of the Year, one of the automotive industry’s most coveted awards. Motor Trend’s announcement follows Automobile Magazine, who also gave the Model S top honors with its own “Automobile of the Year” award.

Motor Trend also announced that not only did the Model S receive its top honor, but this year was the first year that it can remember that a model received a unanimous vote from the panel of Motor Trend judges and guest judges. This is also the first time in the 64-year history of the award that the award was given to a vehicle without a traditional combustion engine.

“Our aspiration with the Model S was to show that an electric car truly can be better than any gasoline car, which is a critical step towards the widespread adoption of sustainable transport,” said Elon Musk, Tesla Motors co-founder and CEO. “Nothing illustrates this more clearly than winning Motor Trend’s Car of the Year by unanimous decision against a field of exceptional competitors.”