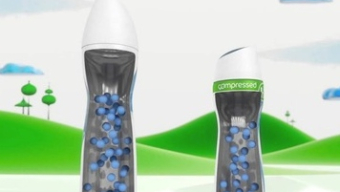 Unilever’s Victoria Murtazina reveals the story behind the award-winning compressed deodorants technology, why some inventions shouldn’t be patented, and what it’s like to be part of the business world’s ‘good gang’

On the face of it, shrinking the size of a deodorant can doesn’t seem like too tall an order does it? After all, most of what’s inside the can is gas, only there to propel deodorant particles on the skin.

But like any great innovation, what seems simple on the surface is actually a lot more complicated than it looks. It actually took a team of Unilever scientists more than a decade to work out how to shrink an aerosol can of deodorant without diminishing the product experience.

The research involved a lengthy process of redesigning for valves, spray rates, fragrance choice, and packaging before Unilever was finally able to launch its Compressed range of deodorants in 2013. The final product lasts just as long as a regular deodorant can, but contains 50 per cent less gas, uses 25 per cent less packaging and delivers a 25 per cent cut in aluminium use, as well as a 35 per cent average reduction in road usage through the supply chain.

“When we speak now, it looks very simple,” says Victoria Murtazina, global marketing director for deodorants at Unilever. “But the process to get there has been very challenging.” She tells BusinessGreen the biggest challenge was redesigning a product to make sure the consumer did not notice anything different. “A lot of work was put into finding the right valve, identifying the right spray rate – it took a lot of testing and fine tuning to make sure that when consumers spray it they don’t perceive any difference,” she says.

The hard work appears to have paid off – since its launch more than 50 per cent of UK consumers have switched to compressed cans, and across Europe the innovation has saved more than 1,500 tonnes of aluminium thanks to the smaller packaging.

Now, you would think that for a profit-making business like Unilever, this is a real R&D success story. Not only have you delivered a ground-breaking innovation that differentiates your products from your competitors, but you have also helped burnish your image as a company at the forefront of green innovation.

However, this is not how Unilever saw the project. “It’s actually not enough if you want to make compressed deodorants commonplace,” Murtazina says. “We looked at global peak share and we realised that globally there are around three billion aerosols being sold every year. We are the leading manufacturer, but there are others. And this is when we started realising that if everyone was in Compressed, then the saving would have been over 20,000 tons of aluminium.”

This is when the Compressed team came to a radical conclusion. “We realised was that it is actually wrong to try and patent technologies which are for the greater good,” Murtazina says. “We believe innovation is great, patenting this is great, this is how you win in the marketplace, but we believe as well that you should compete on the brand merits, on the product merits.”

Murtazina believes Unilever should win customers by offering the most compelling and attractive products. But when it comes to a technology that can offer a real difference to the environmental impact of the entire sector – well, that should be made available to all. “There are things that you should protect but then there are innovations and technologies that are just for the greater good,” Murtazina says.

As a result, Unilever holds no patents on any of the Compressed technology, so other brands are free to apply it to their own ranges. And after the first cans of Compressed started to hit the shelves, Unilever even put together a white paper for manufacturers and rival brands so they could learn more about how Compressed works. Already some supermarkets and competitor brands are starting to launch their own product ranges in Compressed form. Eventually, Murtazina hopes Compressed will become the new normal for deodorants, delivering many more thousands of tons of material savings and associated emissions reductions. “It’s not only about us,” she says. “It’s about the whole industry moving to this format and accepting it as the new norm.”