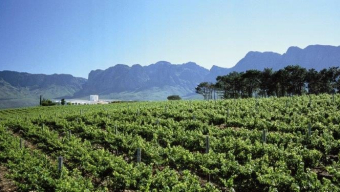 Given the Western Cape drought and World Water Day this Thursday (22 March), there is more awareness than ever of the need to care for this precious resource. And one of the prime South African success stories in water management can be found at 318-year-old Vergelegen wine estate in Somerset West.

The 3000 hectare property, owned by Anglo American, is self-sufficient in all its potable and non-potable water needs. This is despite producing tons of wine grapes, maintaining 18 celebrated gardens, operating two restaurants and welcoming 100 000 visitors every year.

“When we initiated a long-term project in 2004 to clear dense alien vegetation, more than 80% of the farm’s natural veld was invaded by dense pine on the higher slopes, with acacia and eucalyptus species in the low-lying areas,” says Vergelegen MD Don Tooth.

“Alien vegetation uses up to 60% more water than indigenous vegetation, so clearing it away has massively boosted water flow. The additional mountain run-off from the Hottentots Holland mountain range catchment area into the estate dams (including the Rooiland dam, which stores 2.72 million m³ of water) has ensured that the estate now meets all its water needs independently.

“The clearing and maintenance programme has also generated over 230 jobs and provided many opportunities for worker training.”

Mr Tooth said that with the province in dire need of rain, “we are ready to work with the relevant authorities to help vulnerable groups with water should the need arise. We are also happy to share our water conservation research and learnings with other interested parties, through our Centre of Learning Excellence.”

Despite the abundant resources, stringent measures are in place throughout the estate to ensure the water is used optimally. The vineyards have deficit irrigation practices (moisture probes and computer monitoring) while the gardens are watered at night only, using automated irrigation systems.

Water for both residents and visitors is treated on site through the estate’s own filtration systems. Testing shows it is of a higher standard than most municipal systems.

Even the signature restaurant, Camphors at Vergelegen, has rigorous sustainability measures in place. They include harvesting rainwater and using water from the ice-buckets to mop floors and water kitchen herbs.

Such measures contributed to Camphors winning the coveted 2017 Eat Out Woolworths Sustainability Award, as well as being named number six in the Eat Out Mercedes Benz Restaurant Awards.

There are also 80 hectares of rehabilitated wetlands, including a palmiet bed that helps remove excess nutrients from the water and improves its quality. The wetlands shelter  mammals such as otters, mongoose and small buck as well as numerous species of birds, amphibians and invertebrates.