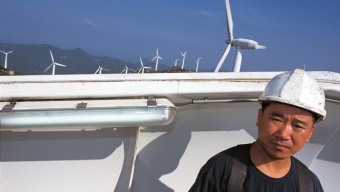 Before March 2011 China had 29 new nuclear reactors under construction. Following the Fukushima Daiichi nuclear disaster in Japan, China announced that all nuclear plant approvals were to be frozen and existing plants reviewed for safety. The moratorium was lifted in October 2012, allowing only the Generation-III nuclear reactor models to go forward. These include improved fuel technology, standardized design for reduced maintenance and are much safer than the existing ones. However, China has no experience with Generation-III reactors, rendering it unlikely for the country to reach the projected 40,000 megawatts of nuclear capacity by 2015.

Wind energy in China now accounts for 5.3 per cent of the country’s generating capacity and supplies about 2 percent of its electricity, placing it behind only coal and hydropower. During the last two years, China’s wind capacity amounted to 19,000 megawatts of electricity. One obstacle for the development of its wind capacity was the incompatibility of the existing grid with the new energy sources. The country’s recent efforts in upgrading the grid have resulted in 75,600 megawatts of wind capacity being fully integrated into the existing grid by the end of 2012.