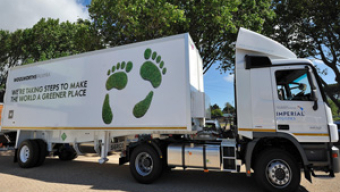 Imperial Logistics chief integration officer Cobus Rossouw outlines the initiative: “As part of its Enterprise Development Programme, Woolworths began working with former taxi driver Jabulani Hlophe to develop an alternative, centralised staff transportation system which would decrease the distance and time travelled by each employee when they go home late at night. Jabulani was one of the exceptional taxi drivers transporting some store employees in KwaZulu-Natal home each night after dark. It was his excellent and reliable service that made Jabulani the obvious choice when a Woolworths procurement manager came to rethink the transport available to store staff and identify a service provider to pilot a more efficient system,”Rossouw reveals.

A loan of R3,3 million, financed through the Woolworths Enterprise Development programme, with further support from Mercedes-Benz, helped Jabulani purchase his fleet of vehicles. “This fleet regularly loops 15 collection points (14 stores and the distribution centre), collecting staff and dropping them off at a central point, where they hop onto another taxi to take them home,” he explains.

The contribution made to the project by Resolve and Imperial Fast ‘n Fresh included facilitating the relationship between Mercedes Benz commercial vehicles East Rand and Woolworths, for the supply at fleet discounted rates of the Mercedes Benz Sprinters, and developing the most efficient routing system for Jabulani’s fledging business, JMH Transport. Resolve’s brief was to support JMH Transport in establishing the most effective set of collection and drop off routes for its 18 vehicle fleet. “We completed a ‘Travelling Salesman’ Calculation,” explains Rossouw. “This calculated the distances between points visited and compares various route options until the shortest travel distance is achieved. The result has been an optimised routing schedule for JMH which can be used on a daily basis to support reduced travel time and distance while maintaining a superior service. The distance and time travelled by each employee has decreased significantly, ensuring that they get home to their families sooner at night. Employee morale has increased so much that participating stores have encouraged other stores to enquire and sign up.”

“Since JMH Transport started operating, Jabulani has been able to employ 28 people,” Rossouw notes. A further benefit, he says, is that with the incentive of driving Mercedes-Benz sprinters, absenteeism of drivers has reduced. The business is 50% black woman owned by Jabulani’s wife, who manages administration.

“This is a great example of the importance and added value in strategically partnering with existing service providers like Mercedes-Benz and Imperial Logistics. This is a pilot project for Woolworths, with huge opportunity to grow in the future, not only within KwaZulu-Natal, but across the country, to eventually service all Woolworths store employees,” he concludes.