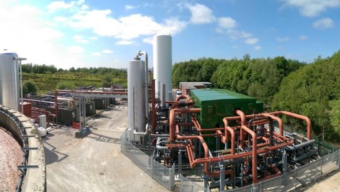 When the liquid air warms up it expands and can drive a turbine to make electricity.

The 5MW plant near Manchester can power up to 5,000 homes for around three hours.

The company behind the scheme, Highview Power Storage, believes that the technology has great potential to be scaled up for long-term use with green energy sources.

Electricity demand varies, influenced by factors like time of day and season. The National Grid is prepared for surges in demand, with power stations on stand-by ready to crank up the power.

However, dealing with these peaks and troughs will become increasingly difficult as coal-fired power stations close down and more intermittent renewable energy like wind and solar comes online. In 2015 renewables provided almost a quarter of UK electricity.

The intermittent nature of green sources has seen researchers focus on trying to improve energy storage.

Pumped hydropower can provide large amounts of energy for long durations, and lithium-ion batteries can respond to demand in milliseconds making them ideal for portable electronic devices and electric vehicles.

But hydropower depends on specific geographies as water has to be pumped uphill, and batteries currently cannot be scaled in a cost effective way to store energy for a town or city.

“Our technology is a bit like a locatable version of a pumped hydro system. Anywhere that needs large scale long-duration storage, that might be to help integrate an offshore wind farm, a system like ours can help achieve that,” Gareth Brett from Highview Power explained, during a visit to the Manchester cryogenic site.

“5MW is a bit small for this technology; anything from 10MW and up is the sort of scale we’re talking about.

Cryogenic storage works by using renewable or off-peak electricity to cool air down to -190 degrees C, which turns it into a liquid.

It’s then stored in an insulated tank, similar to a large thermos flask. To release the stored energy, the liquid air is exposed to ambient conditions causing it to expand back into a gas. The volume increase is huge, about 700 times, which is used to drive a turbine to generate electricity.

Highview Power’s demonstrator plant is next to Pilsworth landfill gas generation site. The large insulated tanks sit across the road from a collection of gas engines. These engines burn methane gas produced from decomposing rubbish to generate electricity. The waste heat from this process is captured and used to increase the efficiency of the cryogenic process.

Alongside the provision of energy storage, this technology can tackle the issues of waste heat which is a by-product of many industrial process. Waste cold, as an example, can be found at liquefied natural gas (LNG) terminals.

While cryogenic storage may be one of the solutions to help the future supply of electricity, there are also new approaches to controlling demand.

“One of the most current issues is understanding the demand side,” Dr Jenifer Baxter, Head of Energy and Environment at the Institution of Engineering and Technology, told the BBC.

“We tend to just produce electricity to meet the demand. Once we understand demand, we will have more confidence in deploying technologies.”

Demand side response, the concept of adjusting usage in response to the available supply of electricity, could work easily alongside other innovations like cryogenic energy storage.