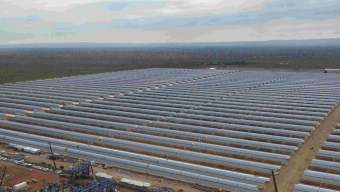 Johannesburg (South Africa), 28 February 2018 – The engineering and technology group SENER and ACCIONA Industrial have achieved the connection of the 100 Mw Concentrated Solar Power (CSP) plant to 132kV ESKOM Distribution line on 23 February 2018. Main and auxiliary transformers have been energized which represents a relevant milestone for power plant commissioning activities.

The Kathu Solar Park CSP Plant, which will supply clean energy to 179,000 homes (estimation of the South African Department of Energy DOE), is equipped with a molten salt storage system that allows 4.5 hours of thermal energy storage to extend the operational capacity of the plant after sunset and uses SENERtrough®-2 collectors, a parabolic trough technology, specifically designed and patented by SENER, aimed at improving efficiency of the plant.

Siyabonga Mbanjwa, SENER Regional Managing Director in Southern Africa, commented: “With this key milestone for the Kathu project, we reassure our commitment to tackling the South Africa’s need for a reliable and sustained energy supply and the improvement of the grid stability, and therefore, we have focused on deploying our patented Concentrated Solar Power to support clean energy generation.”

Roberto Felipe, Chief Operating Officer of ACCIONA Industrial, said: “This project milestone has only been achieved in time and with high quality standards thanks to the Joint Venture’s ability to develop this project in the South African market. We have focused on working with local entities and communities in the region, which is why we are executing Concentrated Solar Power Kathu with excellence.”

Kathu Solar Park is one of the awarded projects in the third round of the Renewable Energy Independent Power Producer Procurement Program (REIPPPP) led by the South African Department of Energy (DOE).

The joint venture between SENER and ACCIONA Industrial was appointed by the ENGIE led consortium to provide engineering, procurement and construction services for the project. Construction started on site in May 2016 and is due for completion in late 2018. Approximately 1,200 jobs are being created during the construction phase. It is estimated that the Kathu Solar Park will save six million tonnes of CO2 over 20 years and will further promote local economic development through the KSP trust and the Kelebogile Trust, which has invested significantly in the local community thus far thereby making a meaningful contribution to the community of the John Taolo Gaetsewe District Municipality situated in the Northern Cape.