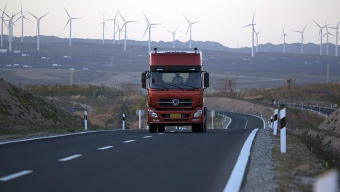 A zero emission transport refrigeration system, powered by the revolutionary Dearman Engine, has been named Innovation of the Year at the prestigious Business Green Leaders Awards.

The judges stated that: ‘In one of our most competitive categories, Dearman edged out the competition thanks to the huge potential offered by its Zero Emission Transport Refrigeration System. With the zero emission, liquid nitrogen piston engine now being commercially deployed, the judges praised both Dearman’s ability to eradicate carbon emissions and air pollution from a sector with a large environmental footprint, and the engineering and commercial skills that went into getting this highly innovative technology to market.’

Commenting on the success, Toby Peters, Founder and Chief Executive, Dearman, said: “The Dearman transport refrigeration system has the potential to deliver a step change in the industry and huge benefits for the environment. Unlike many clean technologies, the system has been designed without compromise, being able to deliver performance, efficiency and significant reductions in emissions, while remaining cost competitive. It’s our belief that transport refrigeration shouldn’t cost the earth.”

He added: “Nothing that has been achieved by Dearman has happened in isolation.  We have forged crucial partnerships with companies including Hubbard and Air Products, whose expertise and innovation have been vital. We have also worked to draw attention to the need to do cold smarter, helping to establish links with government and academia, which have helped to ensure that cold is no longer the Cinderella of the energy debate.”

“This is far from the end of the journey for Dearman, we are working hard to consistently improve our clean cold and power systems and to develop new applications of the Dearman Engine.  We look forward to working alongside partners, old and new, as we strive to make the world a cleaner, cooler place.”

The award-winning transport refrigeration system is powered by the Dearman Engine, which uses the expansion of liquid nitrogen to deliver clean cold and power for the truck.  It has been developed in conjunction with Hubbard Products and Air Products and has recently begun a full operational trial with Sainsbury’s.

A further programme of operational trials and demonstrations will take place in the UK and internationally beginning later in 2016.

The zero emission transport refrigeration system is the first application of Dearman technology to become available to the market. The company is also developing a range of other clean cold and power technologies for use in transport, logistics, the built environment and potentially mining.