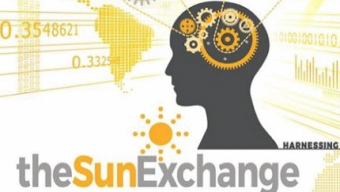 Sun Exchange, a peer-to-peer solar equipment leasing firm has raised $1.6 million (R22 million) in seed financing from several strategic partners to accelerate global access to solar power.
With Sun Exchange anyone can buy remotely located solar cells and earn rental income from them. Assets are recorded on the blockchain, and income is paid in crypto-currency – streaming monetized sunshine around the world.
Sun Exchange members can have their solar cells installed and rented to hospitals, factories, schools and rural communities in Africa and the Middle East, earning them decades of rental income from solar powering the developing world.
Partners include Network Society Ventures (New York City), Kalon Venture Partners (Johannesburg, South Africa) and three technology accelerators, BoostVC (San Francisco Bay Area), Techstars (Boulder, Colorado) and Powerhouse (Oakland, California).
The funding, Sun Exchange said, will boost the firm’s capacity to meet the demand for its pipeline of commercial-scale solar power projects.
Sun Exchange said it is the first company in its field to leverage blockchain technology to allow individuals to purchase solar cells in solar projects which are mostly situated in emerging markets that are solar-rich but power-poor.

Using its blockchain-based platform, Sun Exchange said it democratizes the green economy by giving retail customers around the world the chance to lease solar cells bought on their platform to medium to large solar installations in emerging markets.

Solar panels are sold by the single solar cell, reducing the cost of solar plant ownership to below $10 (R13.67).
“By breaking down solar panel ownership to a single cell we reduce the cost of going solar by two orders of magnitude and we’re utilizing empty roof space in some of the sunniest cities on the planet, such as Dubai and Johannesburg,” said Abraham Cambridge, CEO of Sun Exchange.
“To super-charge the process we’ve combined our solar leases with another breakthrough technology – blockchain, namely Bitcoin. Putting the two together empowers anyone to go solar and be part of the global solar energy transformation with just a few taps on a screen.”