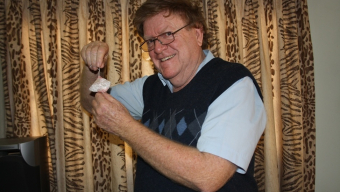 WALKING on the dry riverbeds of the Knersvlakte in Namaqualand, botanists discovered Africa’s source of a green nuclear called Thorium. “Thorium is a radioactive actinide metal, one of only four radioactive elements that occur in quantity in nature as a primordial element (the other three are Bismuth, Plutonium and Uranium). You could get enough power for your entire life from a Thorium ball smaller than that used for golf,” botanist, Pieter du Plessis told the Amanzimtoti South Africa Association of Retired Persons (SAARP) recently.

More than 90% of South Africa’s electricity is generated by coal and there remains only sufficient coal reserves for another 20 to 50 years. Thorium, in stark contrast, is the most prolific mineral on our planet, he said.

“Kusile, a 4 800 MW power station, will be in the middle of an already polluted area. It will use an estimated 17 million tons of coal per year and will generate an estimated 37 million tons of carbon dioxide equivalent emissions annually. This increases our country’s total contribution to climate change by an immense 10%,” Du Plessis said.

“The answer to this is a safe green nuclear power – Thorium. “Thorium is only slightly radioactive and cannot be used to make atomic weapons,” he adds.

Thorium was first discovered in 1828 by Norwegian mineralogist Morten Thrane Esmark and identified by the Swedish chemist Jons Jakob Berzelius, who named it after Thor, the Norse god of Thunder.

To unleash the power of Thorium, you have to bombard it with neutrons. After absorbing two, a Thorium atom morphs to fissionable 233U. This is a relatively well-behaved form of uranium. The worst of its by-products has a half-life of about 350 years compared to 350 000 years for those from 235U or 239Pu (plutonium). It is not a new form of energy in South Africa, the old Coleman lanterns and the old 35 mm film cameras and lenses have the chemical compound, Thorium.

A sphere of Thorium, slightly larger than a tennis ball, could produce enough electricity for an average home for about 8 000 years.

“The Medupi and Kusile power stations under construction will each generate 4 800MW of electricity. This is at a cost of R142 billion on completion of each power station, with the extra operational costs at R120 billion a year. “It won’t even cost a quarter of that amount to build a Thorium power station,” Du Plessis said.

Medupi alone will need 960 000 coal trucks to deliver the 24 million tons of coal required to generate the 4 800 MW power. Imaging how much fuel these trucks are going to burn.

Thorium is already being mined in the Western Cape.Steenkampskraal Thorium Limited is in the business of developing and commercialising Thorium as a clean safe energy source for the future and it is being exported to Norway.

“One can have a reactor in every town. Electricity will be cheaper and transport will come down,” Du Plessis said.